Connecting professional and amateur theatre in Newbury, West Berkshire and beyond

The Aldermaston Players web site is at aldermastonplayers.co.uk.

Book tickets via the web site. 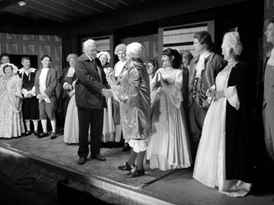 At the opening night of their production, A Laughing Matter, at The Barn, Frouds Lane, Henry Hawes of the National Operatic and Dramatic Association (NODA) presents Aldermaston Players with the 2012 NODA (London Region) Constance Power Trophy for 'the Society Most Worthy of Encouragement'. Chairman Chris Boott receives the trophy on behalf of the Players. NODA are the national body for amateur theatre in the UK which Aldermaston Players joined on becoming an independent organisation in September 2011.

Review of A Laughing Matter

Review from the an audience member.